©2001 - ©2021, Randy Richards. All images, artwork, style and concept ideas are owned by Randy Richards and cannot be copied and/or printed without written consent of Randy Richards. The concept of combining different photos that are taken from different times of day or year(s), in focus out of focus, using different exposures, colorizations etc…and using a cube, or just placing photos on photos or in stripes cannot be used by anyone for any use, or copied and/or printed without Randy Richards written consent. This style originated in 2006 and is documented in painting in 2006 and documented using photography in 2008. This website originated in 2013.

A style that began commercially back in 1987 as seen on "Hollywood in Hartford" poster where I drew a tiny 1" thumbnail drawing and enlarged thousands of percent on a copier. These pieces below show how I then collage onto board and then paint over it as well. The drastically enlarged drawings really show the feeling and impression from each tiny pencil drawing stroke.

CLICK ON ANY IMAGE TO SEE A LARGER, MORE DETAILED VERSION 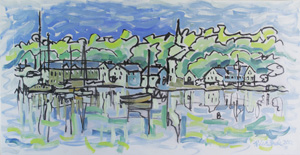 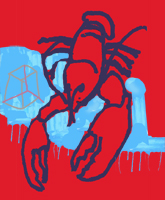 ​printed small, and then 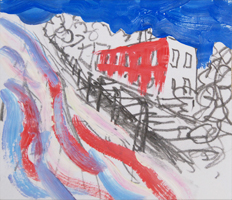 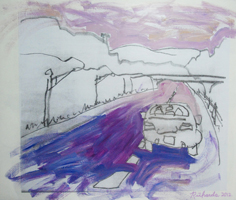 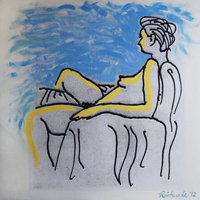 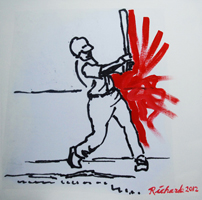 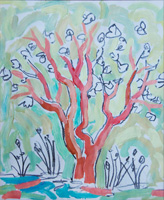 Designed and drawn with a felt
marker while working as Senior
Designer at AT Advertising in
East Hartford, CT.

Originally drawn ​​2" in size and
then blown-up on a stat camera
to print as an illustration on this
24" X 36" poster.

​Published and printed ​in  1998. Designed and drawn
with a felt tip marker while
working as Art Director at
The Hartford in Hartford, CT.​